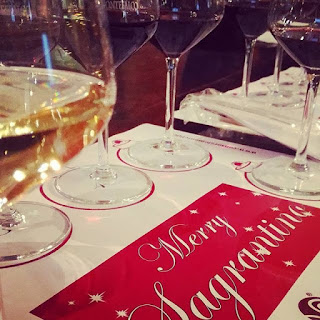 It is not the first time I write on Sagrantino wine on this blog.
I think that in several years of blogging and touring wineries with travelers, the amount of ink and words that I’ve poured on this topic is really huge.
Sagrantino, like all the other complex wines of Italy, is always a surprise, there’s always something new to know, to think about, to meditate on, each time it is in my glass.
The occasion came once again thanks to the invitation by Consorzio Tutela Vini Montefalco, association of wine makers of Montefalco wine area, for the annual event Merry Sagrantino, organized by Consorzio for the promotion of the wines and food from this territory.
Merry Sagrantino – now at its fourth edition – takes place every year the week before Christmas in Montefalco and it is a way to celebrate the festivities and/with this special wine.
The event is growing year by year: last time I took part to it we were in the beautiful headquarters of Consorzio, this year in the stunning Sala del Comune, the ancient main hall inside the building of Montefalco municipality.
Merry Sagrantino is  a very interesting guided tasting, open not only to wine specialists, but to anyone: winelovers, tourists and local people. Always lead by a collegue certified sommelier, this year we had on our glasses six wines produced in this Umbrian terroir: a white and the five reds Sagrantino based, of course.
It’s not be news that this area is famous for its red wines production, in which Sagrantino grape – the indigenous local variety – rules.
In the Court of King Sagrantino there are also white varieties like Trebbiano Spoletino, another local grape that has been cultivated here for centuries, originally in the ancient way of training the vine called vite maritata, a very old practice of cultivation  – used even by the Romans –  of training vines to grow up along living tree trunks. Rare examples are still visible in some vineyards in this wine area, as the one we had the fortune to see in “flesh and blood” in  Castel Ritaldi a couple of years ago. 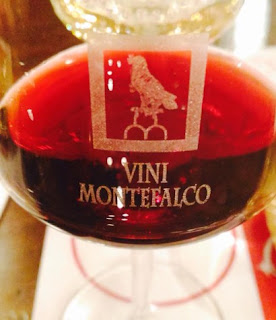 Grown in the valley facing Spoleto, this kind of Trebbiano, fruity and mineral, could become the next white star of this territory. Some important labels started a very interesting production some years ago and now other wineries are making new experiments.

Following Trebbiano refreshing entry, we went on with a Montefalco Rosso and a very pleasant Montefalco Rosso Riserva, to end with two Sagrantino-s dry and one sweet.
Given for granted that nothing in wine is permanent, wine is something “alive”, that changes and can change in the years, as well as the perception and ideas we have on it, I can say that year after year, tasting after tasting, sip after sip of this unique, very complex and powerful wine, I came to two undiscutable axioms on Sagrantino [drum roll!]:
Sagrantino Axiom 1: give it time. Be patient. Let it breath.
The power of the tannins of this wine demands patience, patience in waiting for years, before opening the bottle. According to the regulation of production Sagrantino needs to be aged in barrels [and refined in bottle] for a minimun of 37 months and this is mandatory. But the very best,  the top Sagrantino-s I’ve ever tasted were much older. The tannins that in young ones can be too astringent, in older Sagrantino become very elegant, refined and sofisticated, sometimes an incredible surprise for a wine that is often considerated too powerful.
Patience also means “let it breath”. I’m not a fan of the decanter, not at all of those electronic weird gadgets that promise to “oxigenate” your wine in few seconds…be careful! They only stress the wine, especially the old vintages.
Just remember to be patient, once again, opening the bottle at least 1 hour, better if more, before your dinner. 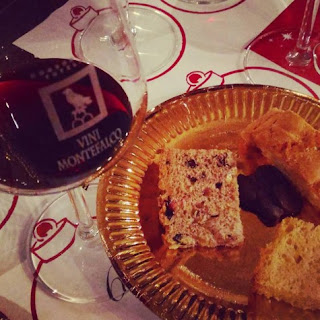 Sagrantino Axiom 2: give it food; proper food.
I ended the sentence above with the word “dinner”. Sagrantino requires foods, because it is not a “middle-class guy”, but a King that gives its specific rules. Like important red wines of Italy, for example Amarone, it needs food that can “resist” to its complexity and tannins. Saying “cheese”, infact, it is not enough, you need an aged or even ultra-aged cheese for the old vintages. Same for “meat”. A simple veal steak is not enough. The King loves game, of course, and wild boar, hare and everything is included in this list, it’s fine.
Glory and Honor to the King, always.

Posted in EVENTS, FOOD and WINE, MY LIFE IN UMBRIA.
CONTACT US