The tradition and ancient food culture of the two tows Orvieto and Todi are the common thread of the project #TerrediConfine [borderlands] by the local Cultural Association Brumalia.

During the first and inaugural event MELODIE IN VIGNA in Todi last Saturday, Brumalia unveiled the rich programme that is running in the month of July in both the territories: 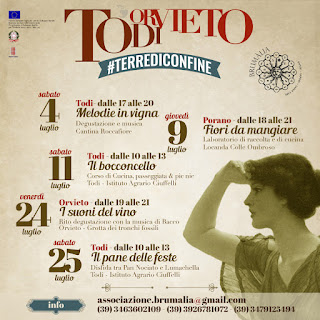 JULY 11 – Todi at Istituto Agrario
IL BOCCONCELLO: Nonna Villelma and her friends disclose the public the original recipe of Bocconcello,  an ancient cheese bread used during the period of the threshing in Todi and other neighbouring towns of Umbria.

For more information, inquiries and booking:

Posted in FOOD and WINE, MY LIFE IN UMBRIA, TIPS.
CONTACT US