I’ve had the opportunity to visit the town of Narni a couple of times recently, but always at night and in Summer, when, you know, it’s so hot that… you’re just waiting for the moon to go somewhere to have a gelato and a passeggiata with friends “al fresco“…

For this reason I’ve never been to the underground of this ancient town, until last weekend when I was invited by the very nice and knowledgeable guide at Narni Sotterranea Aroti Meloni for an “edu-morning” to discover more about Narni, its hidden secrets and incredible stories of friars, prisoners, alchemists and more…

The discover
The underground of Narni was discovered by coincidence in 1979 when a group of very young speleologists guided by Roberto Nini, today the president of Narni Underground, decided to explore this area thanks to the indication of an old man who had an orto (=house garden) just over the underground.
At that time, infact, nobody in Narni remembered the existence of this construction, a former Dominican monastery: memories lost in time, like tears in rain, quoting a very famous movie…

The underground
The first room we were conducted by Aroti is and was a church, probably dedicated to San Michele (saint loved by the Lombards, who conquered part of Umbria in the Early Middle Age) represented in a wonderful fresco.

The second room was probably a sort of neutral space, between the church and the room where the “local branch” of the Tribunal of the Holy Office of the Inquisition acted here in Narni from the sixteen to the half of the eighteen century.
The Inquisition was a group of decentralized institutions – the most important represented by the Dominican Friars –  within the judicial system of the Roman Catholic Church whose aim was to “fight against heretics“.
The laws, at that time, were inclusive of proscriptions against certain religious crimes (heresy, etc.), and the punishments, quite often after terrible tortures, could include imprisonment for life or banishment, but also death by burning especially for those accused to “practice sorcery“.

The Inquisition room
And here we are…in the room, whose walls have probably heard many prisoners crying aloud accused to be witches, heretics or maybe adulterers, bigamous, sinners…
Although we, Italians, are very used to visit places like this one, places that were the witnesses of people’s pains and deaths, like, for instance, our most famous monument, the Colosseum itself, I must admit that…each time a cold shiver runs down my spine… 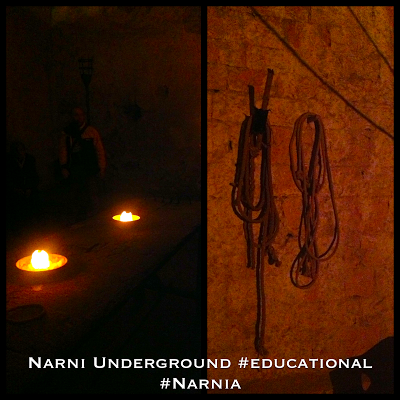 However the creepy sensations in the Inquisition room are nothing in comparison to the ones sent by the prison cell, completely covered by graffiti carved by many prisoners during almost three centuries, like the ones left by Giuseppe Antrea Lombartini imprisoned here between 1759 and 1760…..whose extraordinary story of treachery, mistake, freemasonry and Alchemy is awaiting you in Narni Undergroud.

Information:
Narni is just 45 minutes easy drive from Todi, perfect for a half day visit from our town.
Narni Underground is open all year round. For all the information, guided visits and booking:  http://www.narnisotterranea.it/ or contact: info@narnisotterranea.it

The Narni Underground team has also filmed an amazing documentary visible in Narni, here the trailer:

Posted in MY LIFE IN UMBRIA, TIPS.
CONTACT US