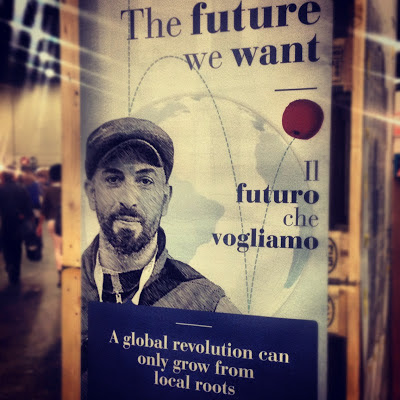 For the very first time in my life, last month I had finally the opportunity to visit probably “the top of the top” of all the international Food Events: Salone del Gusto in Torino, Piedmont.

Salone del Gusto is to a food and wine lover as…. Saint Peter in Rome is to a pilgrim, and I’m not joking! I’m always very serious when I talk about food and wine….

Well… seriously speaking Salone del Gusto is a huge, incredible Food “show” organized by Slow Food, the international movement for the promotion of slow living and preservation of special and rare food, founded in Italy by Mr. Carlo Petrini in 1989.

The first Salone del Gusto, took place in Torino, in 1996 and this year to consolidate the idea that “the world of food and gastronomy cannot neglect those who work the land, who regularly transform nature into culture, who feel the weight of ecological, climate, economic and social problems growing more and more suffocating every day” both Salone and the Communities of Food from all over the World were accessible to all the visitors, not only to the press and media as in the previous years.

Therefore…walking along the huge corridors in the Italian and international area was like taking an amazing, virtual, but al the same time real – as real was all the incredible food I tasted – journey around the World, its countless food traditions and plants, trees, fruits….the so- called biodiversity...

Our Region, Umbria, was also there with some high level food producers and, above all, with its prestigious presidia.

The word presidia means quality productions at risk of extinction made by artisanal food producers. The aim of this project is is promoting local regions and reviving traditional occupations and processing methods.
According to Slow Food, today there are over than 300 presidia all around the world which involve more than 10.000 producers,  small farmers, herders, fisherpeople and artisan producers.

In Umbria the presidia are now six: Mazzafegato dell’Alta Valle Tiberina, Fagiolina del Trasimeno, Sedano Nero di Trevi, Fava Cottora dell’Amerino, Roveja di Civita di Cascia and last but not the least, the brand new one: Cicotto di Grutti.
A very important aspect to point out, before exploring these amazing local specialities, is that in the name of the presidia, you can find the name of the product itself (ex. Mazzafegato) followed by di or del (which – in this case – means from) and the location where that special food is produced.

Location and local are meaningful words in Slow Food philosophy. 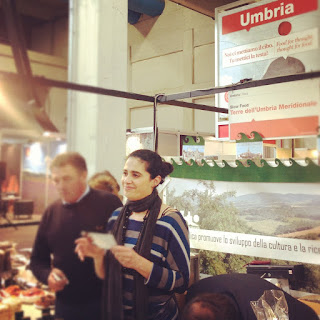 Mazzafegato dell’Alta Valle Tiberina
(special salty liver sausages from the Northern Valley of Tiber river – Northern Umbria).
The name probably comes from “mezzo fegato” (=half liver) or “ammazza fegato” (=to kill the liver) since the intense flavour of the other ingredients like the orange peel, salt and pepper and also fennel seeds overwhelms that of the liver.
Since, as we say in Umbria:  “del maiale non si butta via niente“, i.e. no part of the pig was wasted, Mazzafegato is made by liver, lungs, heart and all the rest not used to make the “standard” sausages. 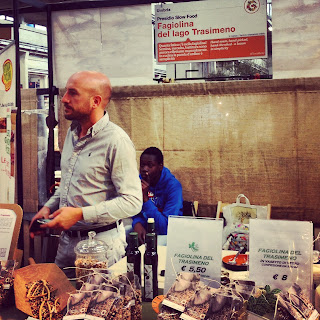 Fagiolina is a very ancient food.The Roman historian, Pliny the Elder, infact,  wrote in the 1st century A.D. that this legume was cultivated in this specific area by the Etruscans and later by the Romans.
Around the second half of the past century the Fagiolina was nearly considered extinct. 30 years ago thanks to the patient and continous work of some young farmers Fagiolina was re-discovered as a very special food product.
Today Fagiolina del Trasimeno is a unique product which has developed peculiar genetic characteristic .

Sedano Nero di Trevi
(Black celery from Trevi)
Trevi is a beautiful village very famous also for the production of high level extra virgin olive oil. The cultivation of this special variety of local celery disappeared in the Fifties with the introduction of the so-called “American celery”.
Sedano di Trevi, very rich in flavours and aromas, contains anti-inflammatory agents and, for this reason, it was traditionally used in various medical preparations. Maturation takes place in October when the ribs of the celery have obtained a dark green or “black”  colour and at this point they are buried underground with only the leafy head visible. After 15 -20 days, the celery is ready to be harvested.

Fava Cottora dell’Amerino
(Fava bean from the area of Amelia)
This special variety of fava or broad bean has been cultivated in this area, between Todi and Amelia, since centuries. Its name in Italian “cottora” means easy to cook, differently from the standard one, harder and bigger. Fava Cottora is harvested in July, when the plant is very dry to help the selection, made only by hand. 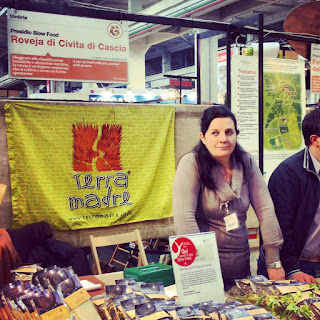 Roveja di Civita di Cascia
(Special Pea from Civita di Cascia)
Roveja is a little legume similar to a pea cultivated in the area of Sibillini Mountains on the border between Umbria and Le Marche. Thanks to its special caracteristics, Roveja is very resistant to low temperatures, as the ones we can find in Winter in those areas, and it requires a very small amount of water to grow.
Roveja is very rich in proteins, phosphorus and potassium.

Cicotto di Grutti
(Special pork preparation from Grutti)
Cicotto di Grutti is the newest presidium, as it gained this special recognition in 2012, thanks to the efforts of the local producers, who worked really very hard to make this little dream come true… 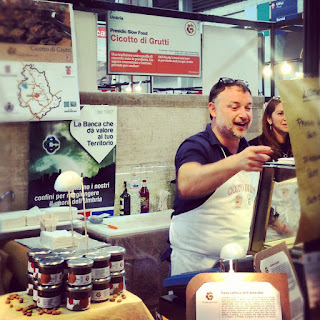 Like for Mazzafegato dell’Alta Valle Tiberina, Cicotto also is made by the nobless parts of the pig, like knuckles, ears, entrails, snout that are roasted under the noble part: porchetta (special roast pork).
In this way all the aromas used to stuff it, like fennel, garlic, rosemary, salt and pepper drip on Cicotto, giving it its special taste.

Last year I had the honor to partecipate to the “presentation” dinner for Cicotto di Grutti, at the very beginning of this adventure…(read more here)