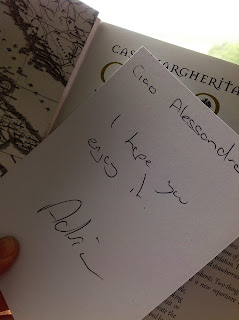 It’s incredible how the web and social media are totally changing the way we are able to connect with other people, and even more incredible for us, discovering how many nice folks from other Countries lived and live here and wrote or represented in art works our Umbria.

After the inteview to Terry Bhola, writer and, to Jenny Smith, painter, we are very happy to host here another writer (…and on one of our favourite topics: food), Adrian Henry from the UK…and Trevi!

Adrian was so kind to contact us and to send us a copy of his very nice cookbook on Umbrian recipes  full of  great pictures and a very engaging layout. Recipes that we (…and, you know, we are both Umbrian 100%) not only consider very authentic and based –  even the “modern” ones – on local products and flavours, but really…full of love and passion for our region and its culinary traditions!
Thank you very much Adrian!
Adrian tell us where are you from and why you “dropped” in Umbria 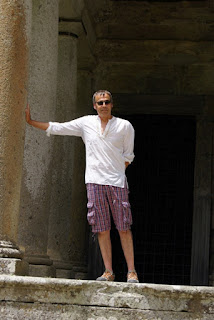 Originally I am from a small island called Guernsey but lived in London for over 20 years before moving to Trevi. In a sense Umbria chose me as I was looking for a house in the area with my partner and fell in love with the house and the area.
What inspired you to write a cookbook on Umbrian recipes ?
On moving here I was immediately struck by the change in our food. We went from shopping in supermarkets where there was no seasonality in the fruit and vegetables to shopping at the weekly market in Trevi where the produce was highly seasonal and predominantly produced in Italy. In addition the restaurants offer almost exclusively Umbrian food. These two things combined had a profound effect on my cooking.
Looking around at other cookbooks it was clear very few reflected the regionality of Italian cooking that is evident to those who live or visit Italy. I wanted to fill this gap.
How did you come up with the title?
Italians love language and I wanted an element of Italian in the title and “Cuoco” works well as it means both ‘Chef’ and [in a sense also] – ‘I cook’.
What would you say would be the best qualities a “foreigner” should have to become not only a good connoisseur of Umbrian culinary traditions, but one whose cuisine could be appreciated by local people?
I would say that to become a good connoisseur of Umbrian cuisine then you need to eat as many times as you can in other peoples homes as the culinary traditions are founded in home cooking. What you eat in restaurants is an extension of home cooking.
Learn about the food by talking to people about food. They are very happy to share stories about their food. People are always interested in how the local delicacies can be used in new ways.
Are there any people that have helped you in your research?
I would say not one person in particular but everyone I have met, stood next to at the fruttivendola (=greengrocer), chatted to, in whose restaurant I have eaten and whose food I have eaten.
Umbrians love food and love to talk about food. So many conversations are peppered with recipes, talk of food , what to do with a particular vegetable, what has just been eaten or what is going to be eaten. The importance of food and how it is cooked seeps into you.
Name one person that you feel supported you during your writing.
My partner Rachel who designed the book, tasted the recipes, helped take the photographs, and encouraged me all along.
Is there anything you found particularly challenging in writing your cookbook?
I wanted the book to have an easy writing style and to have a travelogue element linking the towns of Umbria with the food they are connected with such as Perugia withchocolate, Trevi with olive oil and Cascia with saffron.

The hardest part was ensuring the recipes were clear and easy to follow.

What was the hardest part of writing on Umbrian culinary traditions?
I really wanted to combine tradition with a different way of looking at the Umbrian Larder – hence recipes like semifreddo with honey and lavender. Not traditional but using the fantastic honey sold everywhere locally. For the traditional recipes getting a concensus on how to make or what to include in a given dish was interesting with everyone having a slight personalisation of what might be perceived as a traditional dish.

Did you learn anything from writing your cookbook and what was it?
Whilst “Cuoco” is not a massive tomb, like many projects it took a lot longer than I thought. So think how long you think it will take and double it!
Do you have any advice for other foreigners who want to live in Umbria? If you had to cook a nice meal for your Umbrian friends in just 30 minutes, what would you cook?
Learn Italian before you come as it makes life so much easier. Also be sure you travel widely so you appreciate the variety of location choices that are open to you.
OK. 30 minutes only. So to start I would have a spicy lentil soup which has some curry spicing which gives it a warmth and depth of flavour. With this I would have some bruschetta drenched with extra virgin olive oil and a sprinkling of paprika to make it slightly different.
After this I would serve my saltimbocca variante which uses thin slices of pork loin instead of the traditional veal and is then rolled with prosciutto crudo and sage leaves.
I have a weakness for chocolate especially really good artisanal Umbrian chocolate and so would servemy chocolate mousse.
It’s nice to offer local people something they are familiar with but then to give it a little twist. They really appreciate it.

“The Casa Margherita Cookbook – Cuoco – Recipes from Umbria’s Larder” is available to buy online here priced €10.00 and from outlets throughout Umbria.

See related Guest Writers and their love for Umbria:

Umbria, stunningly beautiful – Peter Jones (Canada)
All the road lead to…Umbria! – Lies and Peter Bijleveld (The Netherlands)
The everlasting true love of my life: Umbria – Yo Harff  (The Netherlands)

A Portrait of a Lady [Umbria]– Jenny Smith (England/USA)
Searching for Wild Asparagus in Umbria: another kind of Dolce Vita – Terry Bhola (Trinidad Tobago/USA)
Posted in GUEST POSTS.
CONTACT US