We are very happy to host on our blog our friend and supporter of Umbria, Yo Harff.
As other very nice people who were so kind to write about their love for our home land, I “met” Yo for the very first time on “Twitter” under the common interest that is – obviously – Umbria.
Tweetting and RTweetting I discovered that Yo also has a great passion for cooking, passion that she’s happy to share with all of us on her bilingual blog:
“La vita di Monteolivo” 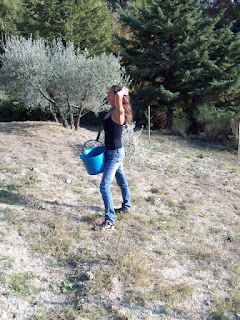 About me:
My name is Yo, I live in a house named Monteolivo, in The Netherlands, in a village near Alkmaar, called Heiloo.
I divide my time between my job as a quality controller, that I love, and my favorite things in life. Those are the Italian kitchen, my vegetable- and herbgarden, and my pets.
There are six cats, of which Pio is my absolute nr. 1 and two German Shepherds called Uno and Chica. I love to write and share about these things, that make life worth living, in my blog `La vita di Monteolivo.`
But apart from that, three times a year I simply have to follow my roots and travel to Italy and Umbria in particular.

How I discovered Umbria
When I was a kid, I used to travel to Italy for visits with my parents and saw a lot of it, but somehow – no family there – we never made it to Umbria.
On one of those summerholidays I read an adventurebook about a knight who got lost and ended up in Perugia, a city I had never heard of, but the description of medieval Perugia was very attractive, even at that age, and I simply never got it out of my mind. So I took the first chance when I was able to. My acquaintance with Umbria started in the summer of 1992 at the Trasimeno lake, in a small hamlet called Sant´Arcangelo di Magione. Of course, one of the first trips I made led to Perugia.
It was the beginning of the everlasting true love of my life: Umbria.
Why Umbria
I have never left it since then. People often ask me what´s so special about Umbria. My answer may seem a little simple, but it just says it all: il clima, la gente, il cibo (the climate, the people, the food). There´s nothing better than stepping outside in Summer, see the sunrise on the hills and knowing that it is going to be a long, hot, beautiful day. I love to see the sunflowers, the vineyards and olivefields bathing in the sunshine.
As well as in Autumn, when the vineyards show their splendid terra and yellow colors and you can still sit outside after a long day of picking olives. Not to mention the Piano Grande in Spring, when its flowers start to prepare for a beautiful Summer.
The best in Umbria are its people. Meanwhile, I have been so fortunate to have made many friends and though they all have their own qualities,they have one thing in common: they are proud of Umbria and of being Umbrian.
And they are eager to share it with you.
That way I saw a lot of precious spots in Umbria that I would never have found on my own. I especially love the amazing countryside and its small villages, I fell in love with the rougher nature in the Valnerina, for I am an outside girl at heart, but the Umbrian cities are more than worth visiting. I recommend Todi, Spoleto, Assisi, Orvieto, Gubbio, Norcia, Spello…and that is because I cannot mention them all. And of course, I still visit Perugia each time I´m in Umbria.
I can be short about the food. Umbrian food is not something you talk much about, you just have to try and live it. Have a porchetta sandwich, lentils from Castelluccio, strangozzi (pasta) with wild boar, hare or truffles from Norcia, try the red potatoes from Colfiorito, or keep it simple and have some typical Umbrian bread with a little olive oil from Trevi. It´s not just eating, it´s experiencing.
And if you have some time left, visit one of the museums because Umbria can show you a lot of treasures. I visited the Signorelli exhibition in the Galleria in Perugia this year, but there are a lot more masterpieces to be seen.
Which brings me back to my first time in Umbria..
I went to several museums and also visited the Galleria in Perugia. After a while I forgot about the rest of the world. But then, a few hours later, I heard my youngest son Stefano (age four at that time) scream: `if I have to watch one more Jesus again I swear I am going to throw up!`
And that apparently was the sign for an older gentleman to tell my son that he was absolutely right and `if he would like some icecream`…. fortunately for Stefano, Umbria had it all, and still has.
See related Guest Writers and their love for Umbria:
A Portrait of a Lady : Umbria – Jenny Smith (England/USA)
Searching for Wild Asparagus in Umbria: another kind of Dolce Vita – Terry Bhola (Trinidad Tobago/USA)
Posted in GUEST POSTS.
CONTACT US