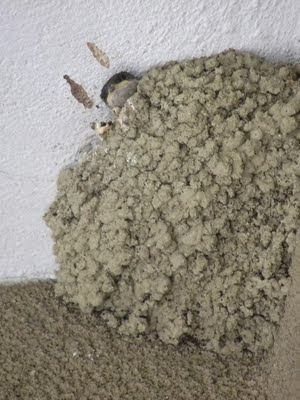 My new flatmates are from Africa. They are quite young and they have black eyes and black hair with a white stripe on their belly and they are so good in…. twitting, of course!
No, no, they don’t have any tablet, smartphone or stuff like that: they really twitt!

Yes, my new flatmates are two gorgeous swallows who have decided to build their nest just under the roof of my apartment’s balcony in Todi, Umbria.

A couple of weeks ago, I was doing my housekeeping and when I went out to the balcony I discovered a not so nice “souvenir” that my flatmates left on the floor. 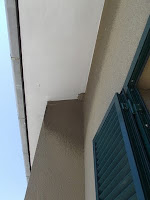 I immediately looked up and I saw this spectacular mud nest that my ingenious feathered friends built as their Umbrian home. 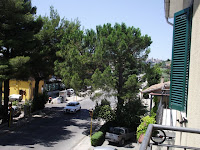 I was so excited that I took my camera and waited for a while to try to take some pictures to these new unexpected guests.
I was so surprised as they weren’t afraid of me at all! They even looked at me with a sort of expression in their eyes saying:
“And so?? Why are you so suprised? We have been living here since a couple of months and you haven’t noticed us…you, “un“civilized mammal so involved in caring only on your vanishing electronic tweets…”

The Swallow in literature 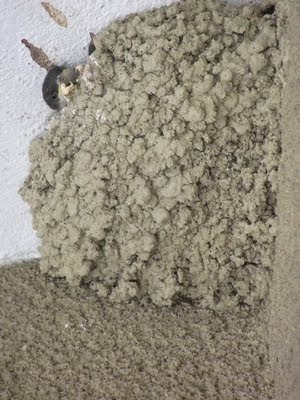 Many literary references are based on the swallow. It is very famous the proverb by Aristotle : “For as one swallow does not make a spring” meaning that one day or a short time does not make a fortunate or happy man.

The swallow is also cited in several of William Shakespeare’s plays for the swiftness of its flight : “True hope is swift, and flies with swallow’s wings …” (Richard III), and “I have horse will follow where the game Makes way, and run like swallows o’er the plain” (Titus Andronicus). Shakespeare also references the annual migration of the species poetically in The Winter’s Tale: “Daffodils, That come before the swallow dares, and take The winds of March with beauty“

In “The Waste Land”, T. S. Eliot quoted the line “Quando fiam uti chelidon [ut tacere desinam]?” (“When will I be like the swallow, so that I can stop being silent?”) referring to a version of the myth of Philomela in which she turns into a Nightingale and her sister Procne into a Swallow.

So amazing it is an image of the assembly of swallows for their southward migration in John Keats’s “Ode To Autumn“:

SEASON of mists and mellow fruitfulness,
Close bosom-friend of the maturing sun;
Conspiring with him how to load and bless
With fruit the vines that round the thatch-eaves run;
To bend with apples the moss’d cottage-trees,
And fill all fruit with ripeness to the core;
To swell the gourd, and plump the hazel shells
With a sweet kernel; to set budding more,
And still more, later flowers for the bees,
Until they think warm days will never cease;
For Summer has o’erbrimm’d their clammy cells.

Who hath not seen thee oft amid thy store?
Sometimes whoever seeks abroad may find
Thee sitting careless on a granary floor,
Thy hair soft-lifted by the winnowing wind;
Or on a half-reap’d furrow sound asleep,
Drowsed with the fume of poppies, while thy hook
Spares the next swath and all its twinèd flowers:
And sometimes like a gleaner thou dost keep
Steady thy laden head across a brook;
Or by a cyder-press, with patient look,
Thou watchest the last oozings, hours by hours.

Where are the songs of Spring? Ay, where are they?
Think not of them, thou hast thy music too,—
While barrèd clouds bloom the soft-dying day
And touch the stubble-plains with rosy hue;
Then in a wailful choir the small gnats mourn
Among the river-sallows, borne aloft
Or sinking as the light wind lives or dies;
And full-grown lambs loud bleat from hilly bourn;
Hedge-crickets sing; and now with treble soft
The redbreast whistles from a garden-croft;
And gathering swallows twitter in the skies.