Dear friends and readers, in this blog we have discussed about many symbols of Umbria connected to its history, art, food and traditions.
This time we would like introducing another “must-see” in Umbria: the Ape Car.

Although Ape Car was not conceived here, but in the famous scooter factory Piaggio near Pisa, this very special vehicle has always had great success in our region. 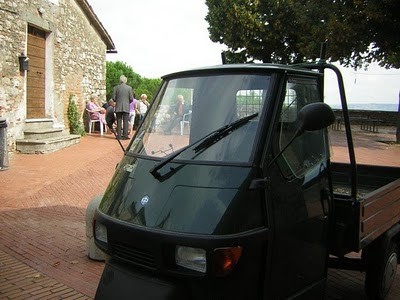 Ape (whose name actually means “Honey-Bee”) was created in 1948, thanks to Corradino D’Ascanio, aircraft designer and inventor of the famous scooter Vespa.
At the end of the Second Word infact, most Italians lacked modes of transport and the financial means to acquire full-sized four-wheeled vehicles but at the same time they needed a commercial car to power Italy’s economical reconstruction.
D’Ascanio with the favour of Enrico Piaggio, came up with the idea of building a light three wheeled vehicle, based on the former project of the Vespa with two wheels added to the rear and a flat-bed structure on top.

An Ape in front of us, on the way to Bevagna…so “lucky” we are!! 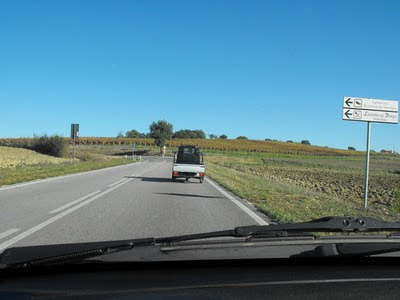 Given that in the past the economy of Umbria was totally based on agriculture, the Ape Car has always played a very important role here in the region.
Even if we -Umbrians- drive “standard” four wheeled cars today, Ape (affectionately called by the locals “Apetto”=Little Bee) is still quite common especially among old people who own of a piece of land.
For these people the “Apetto” is very important: they can carry their vegetables on it, their tools to work the soil or to prune the olive trees, the boxes full of olives for the oil mill and the ones of grapes to make their home-made wine.
In addition, according to the Rules of the Road, Ape is not consider a real car, but more a scooter, so that a different driving license – easier to get – is required.

My secret dream: owning an Apetto! 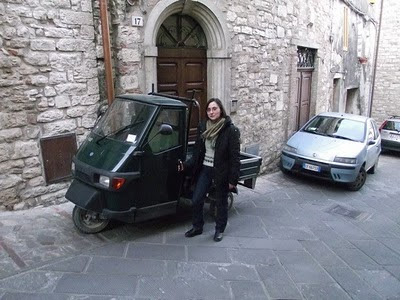 If you’ll have the chance to drive on our beautiful winding roads in a wonderful sunny day under the Umbrian sky, be aware of the fact that you’ll have a very high possibility to stumble on an “Apetto” driving at the incredible cruise speed of 20 km per hour…. and your road will be so twisting that you couldn’t overtake this cute “Little Bee” in front of you…..
……so there’ll be nothing to do in this case…just taking your time…

…slow down friends: you are in Umbria!

Very funny video with Super Ape Car. Do not imitate the stuntmen!