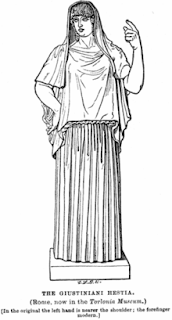 On this day, typically JUN-21, the daytime hours are at a maximum in the Northern hemisphere, and night time is at a minimum.It is officially the first day of summer.

“Solstice” is derived from two Latin words: “sol” meaning sun, and “sistere,” to cause to stand still. This is because, as the summer solstice approaches, the noonday sun rises higher and higher in the sky on each successive day. On the day of the solstice, it rises an imperceptible amount, compared to the day before. In this sense, it “stands still.”

In Ancient Rome this period was celebrated with a festival: the festival of Vestalia lasted from JUN-7 to JUN-15. It was held in honor of the Roman Goddess of the hearth, Vesta. Married women were able to enter the shrine of Vesta during the festival. At other times of the year, only the vestal virgins were permitted inside.

Vesta was the virgin goddess of the hearth, home, and family in Roman religion. Vesta’s presence was symbolized by the sacred fire that burned at her hearth and temples

Vesta’s fire was guarded at her Temples by her priestesses, the Vestales. Every March 1 the fire was renewed. One of the Vestales mentioned in mythology was Rhea Silvia, who with the God Mars conceived Romulus and Remus who founded Rome, according to the legend.
The Vestales were one of the few full-time clergy positions in Roman religion. They were drawn from the patrician class and had to observe absolute chastity for 30 years